In Their Own Words

How do we represent Coventry Creative Freelancers’ voices and experiences?

‘Coventry Creative Freelancers: in their own words’ is the product of a three month collaboration between researchers Kevin Broughton, Nick Henry and Peter Dickinson and local Coventry artist Frances Yeung. The original research project was led by Nick Henry and aimed to investigate the ‘lived experience’ of working practices and business models of creative freelancers. This was later revised to include the impact of the Pandemic (as the first Lockdown took place as the project was in its early stages). The research involved 84 interviews with creative freelancers from Coventry, Waltham Forest (London) and Northumberland. This generated a vast amount of data – ‘in their own words’ – which the researchers felt was impossible to represent in our final research reports. The Coventry Creates initiative offered one opportunity to represent more of these ‘voices’ of creative freelancers, from a Coventry perspective.

Working together –  the development process

As researchers, we had only a vague idea of what we thought might be an appropriate artistic representation of Coventry creative freelancers’ voices and experiences. We knew we wanted to use a range of audio recordings of the creative freelancers from the interviews, and we had the key themes from the research reports as a rough guide. We wanted to have some kind of animation that provided representations of these lived experiences. Articulating this to the artist was challenging and the early stage of the Coventry Creates project was a period of ambiguity and gradual clarification.

Once the researchers developed a ‘storyboard’, guided by the artist’s experience, things started to progress a little more rapidly. Initial templates for the animations were then developed by the artist and the researchers then began to identify three themes that we thought were the most significant. Key quotes based on these three themes were then identified – but this was not an easy task. At the time of the research, the quality of the recordings of the interviews was not a top priority – they were fit for purpose for the research, but not all recordings were of sufficient quality for an artistic output. This meant reducing the pool of quotes to draw from, although this did help to speed up that process!

Once the pool of quotes had been identified and shared with the artist, this gave the artist the inspiration to develop the animation sequences. This was a challenging process, and at times very time-consuming, but the initial ‘drafts’ of the various animation sequences were developed and shared with the researchers. They were a great foundation from which to build upon and then the development of the final product really got moving.

Back and forth, back and forth, with various drafts of the animation sequences – the researchers and artist worked really well together identifying technical issues, sequencing improvements and artistic flourishes. By the final stages of development, the researchers had learnt a lot about how such animations ‘worked’ and were very happy and impressed with the artistic outputs and speed of the artist to refine the final work.

This three month period to develop the artistic endeavour has been challenging at various times. In the early period, we had to overcome each other’s lack of understanding of what we wanted to develop to the satisfaction of both parties. Both the artist and the researchers have also struggled, at times, to have the capacity to deal with the work, on top of all the other commitments we have. But we have all been understanding about each other’s circumstances – after all, the creative freelancer research highlighted the many challenges that the local artist, a creative freelancer, faces on a daily basis. And the artist understood that this project was also one of many commitments that the researchers are involved in. Such understandings enhanced the collaboration process, and we hope the end result is able to do justice to at least some of those ‘voices’ of Coventry’s creative freelancers.

The researchers and artist would like to thank Coventry Creates for funding this artistic endeavour and the organisations below who were stakeholders in the original research.

The funding for the original Creative Freelancers research was awarded by the ‘Nesta Creative Industries Policy and Evidence Centre’. Support and collaboration came from the following partners:

Coventry University (Centre for Business in Society) – “Building Back Better? Creative Freelancers and Learning from the Covid-19 Experience” Report

Understanding the role, contribution and challenges of creative freelance work

Covid and Building Back Better

The value of creative freelancers

The collaboration has simply made us all more human.

Our role could be researchers, could be artists, but above all, we are human. It’s a good place to be, as the whole project emphasises a humanistic approach – attempts to understand and shine a spotlight on the creative freelancers and their ‘lived experience’ in their own words.

There have been many uncertainties and challenges during various stages of the project, faced by both researchers and artist. However, through continued dialogue, openness and empathy, we have managed to get through these creative phases together. 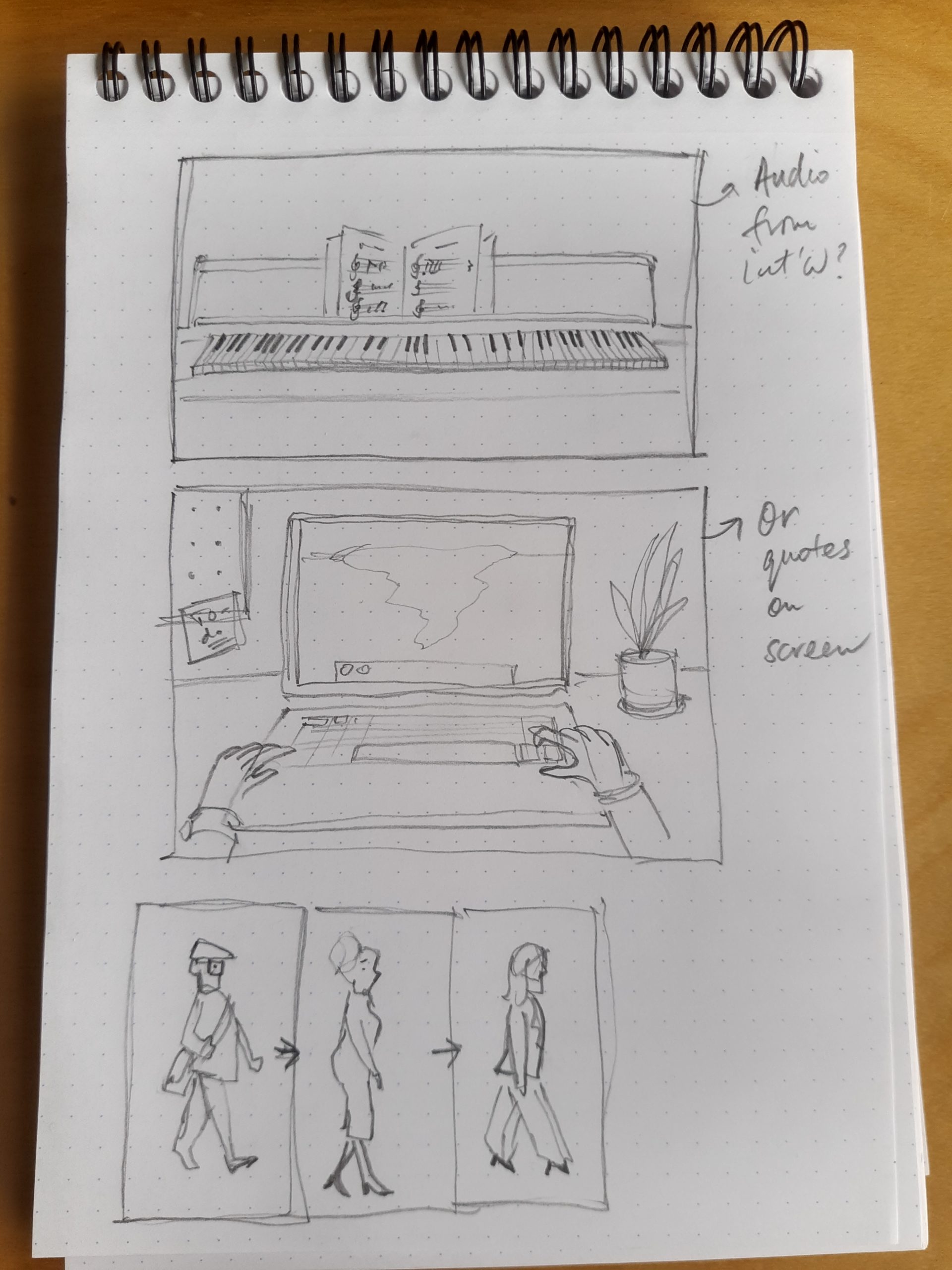 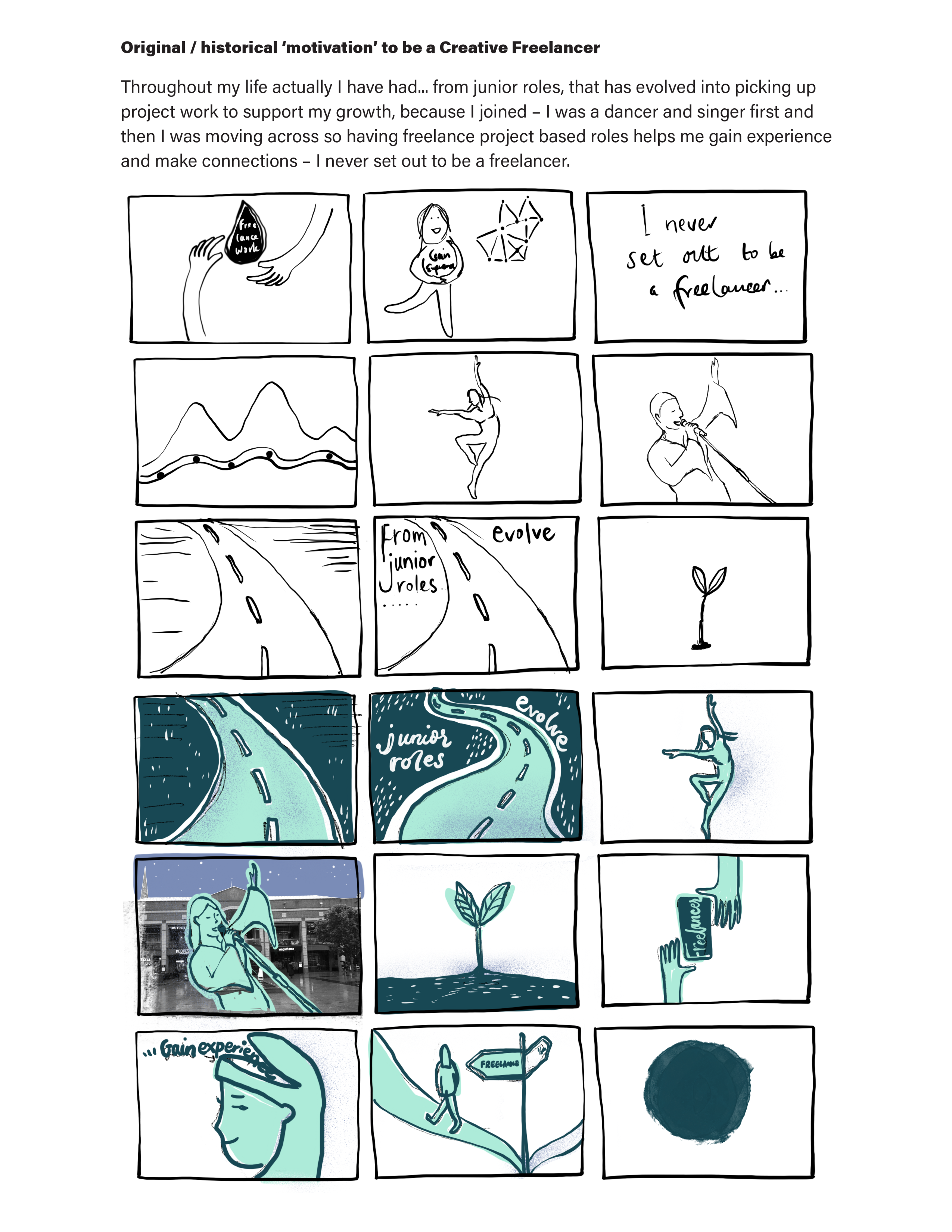 During the early stage of the process, I recall I was finding it hard to have an emotional connection to the research materials – many of the reports are (rightfully!) filled with statistics and policy-level languages. The turning point has to be listening to all the audio recordings from many participants – different gender, different accent, some calm, some excitable. And in their own words, they all shared their highs and lows. This then inspired me to approach the project in a hand-drawn, DIY, whimsical visual style, to represent that these creatives are all individuals, they are all unique and often get into the freelance industry in unexpected ways. We also feel that ‘Coventry’ – the place – is an essential element to be featured in the outcome.

The whole process of collaboration has also provided clarity for my own freelance creative practise. I have reflected on the importance of self-care and work/life balance – I’m prepared to take steps in creating a proactive and healthier path. 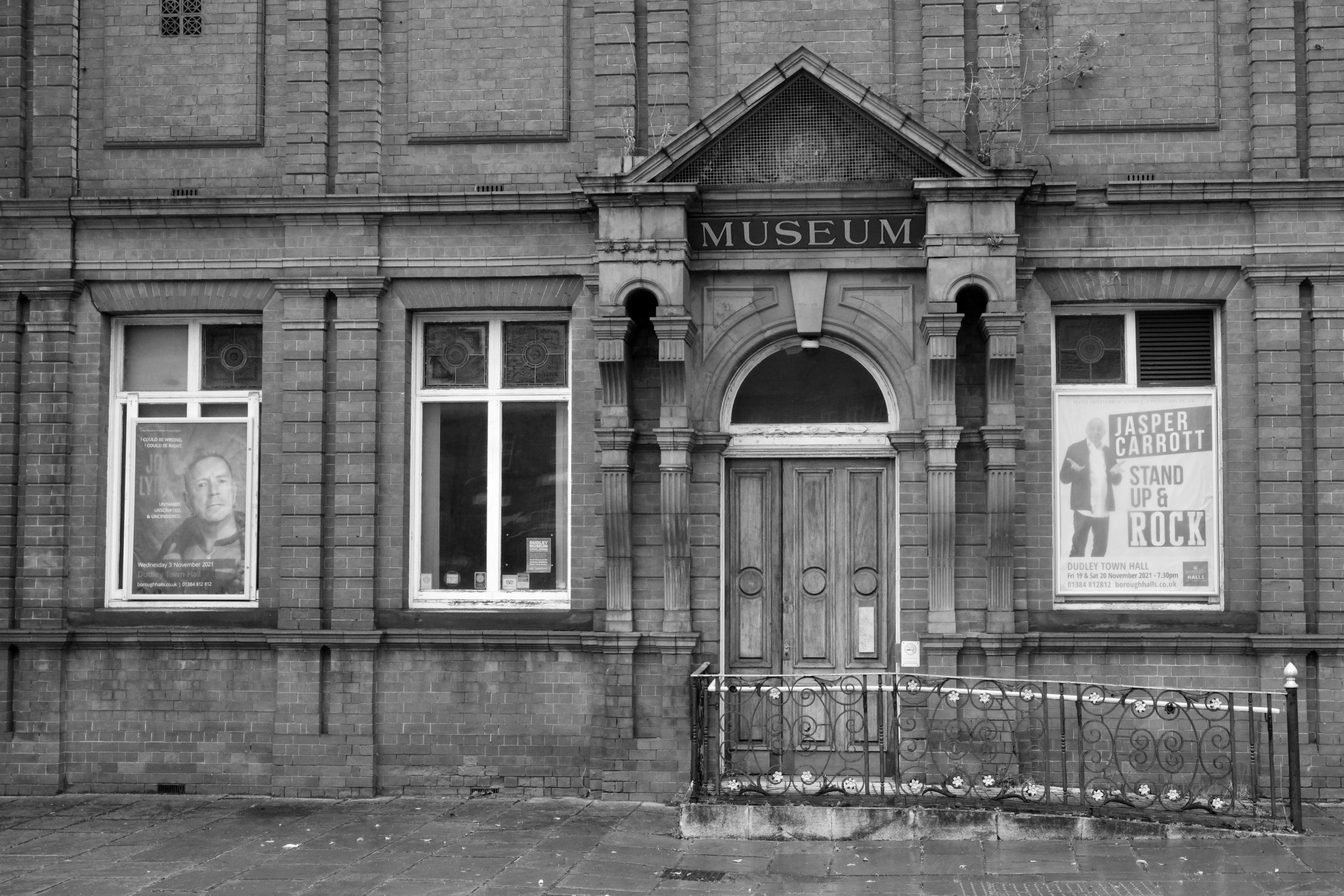 Why are museums closing and what does it mean?