The impact and implications of Covid-19 on the relational, social, and healthcare experiences of hospice care in the West Midlands’ study.

People with life limiting conditions are some of the most vulnerable to Covid-19. The aim of our study is to provide an in-depth understanding of the experiences of those involved in receiving and providing hospice care during the pandemic. We will use our findings to contribute to nationally relevant recommendations to help mitigate adverse relational, social and healthcare impacts of Covid-19 upon hospice services for vulnerable service users and those that care for them.

Before we started our own interviews, we wanted to see what other researchers had identified as affecting hospice care. We also spoke with some of the hospice staff, as well as a range of people with expertise – from working, researching, or lived experiences – in palliative care. We summarised what we found in our ‘knowledge synthesis’ report.

I shared the report with Emily and we met via video calls on several occasions to talk about the study, as well as dying and palliative care more broadly. Our conversations explored a range of issues from practicalities of providing hospice care in a pandemic to more philosophical questions of how we understand dying in society today. 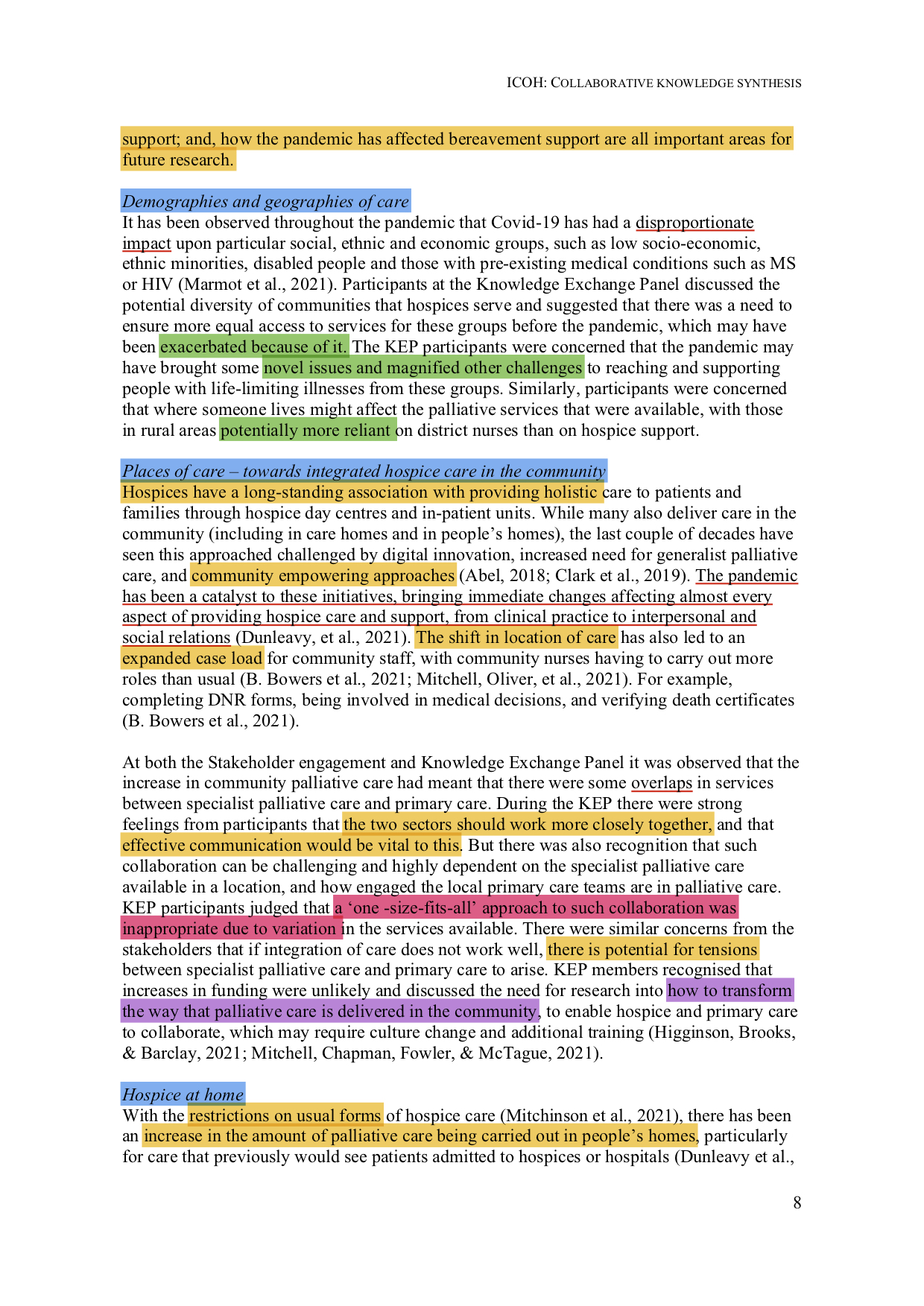 I experienced Emily’s piece as an aural and visual representation of the pandemic and its impact upon hospice care. For me it is a striking (re)conceptualisation of many things I had come to understand as affecting people with life limiting conditions, their families and close persons, and the hospice staff who sought to care and support them.

In both the piece and many lived experiences of the pandemic there is a sense of rhythm to proceedings. But not a rhythm that is overly regular or that gives the impression that it can be maintained for long. Neither ever seem to want to go back to what it was before, but both often present like it is something (unwantedly) familiar that is coming around again (and again).

The oscillating alien soundscape of the piece resonates with experiences of the pandemic in that can both can be intrusively present; but also, at times, so faded we might question if what we are witnessing are the reverberations of our imagination.

The piece, the pandemic, and dying: it is not always clear what we are looking at and just when something comes into view, it moves away again. Each can be uncomfortable to witness, to sit with, or be around. They call us to disaggregate what is natural, what human-caused, what their meaning really is.

What do we know about the impact of the Covid-19 pandemic on hospices?

The collaboration between myself, Dr John MacArtney and his research into end of life care was initiated at a pertinent time, whilst dealing with a personal bereavement amidst the ongoing impacts of a global pandemic. With little understanding around the contemporary role of the hospice, I was introduced by John to the history of palliative care, and learnt more about the holistic approach to caring for those with life limiting conditions.

We shared an interest and curiosity relating to the social and cultural mindsets surrounding death, and in particular how we sit with the troubling aspects of pain and demise. In early discussions I shared my research interests in Deep Listening, and the role of sonics in facilitating a deeper awareness of a situation. Having collaborated and produced experimental audio works over the last two years with artist and producer Marley Butler, I was keen to develop an audio response that would engage some of the key themes in John’s recently published ‘knowledge synthesis’ report.

The artistic outcome of the project is titled ‘Things Change, Things Changed’ – a quote extracted from an interviewee included in the report. It is a deep listening opportunity, a meditation reflecting the research, and is accompanied by a slow evolving film and poster, highlighting the material that informed the work. 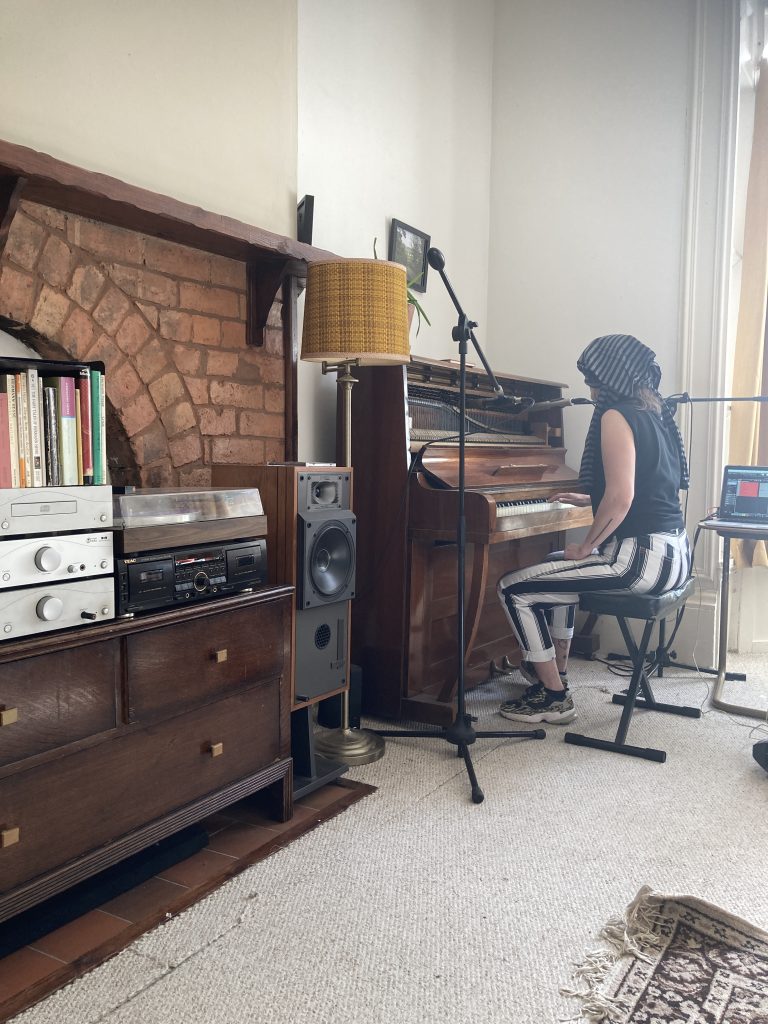 Extracting resonant quotes from the report, I created a series of scores that interpreted the climate and conditions that local hospices and hospice users faced during the pandemic. These were used as departure points in a series of studio days with Marley Butler, in which I experimented with an acoustic piano, a broken cassette recorder and a digital synthesizer. Rather than use the piano to create music, I explored the instrument blindfolded, following a selection of scores. Testing what a piano sounded when performed through the idea of ‘loss of bodies’ or ‘slow evolution’ generated an obscure soundtrack, which was layered with a pulsing digital rhythm from the synthesizer, and the faint grinding of the broken tape recorder. 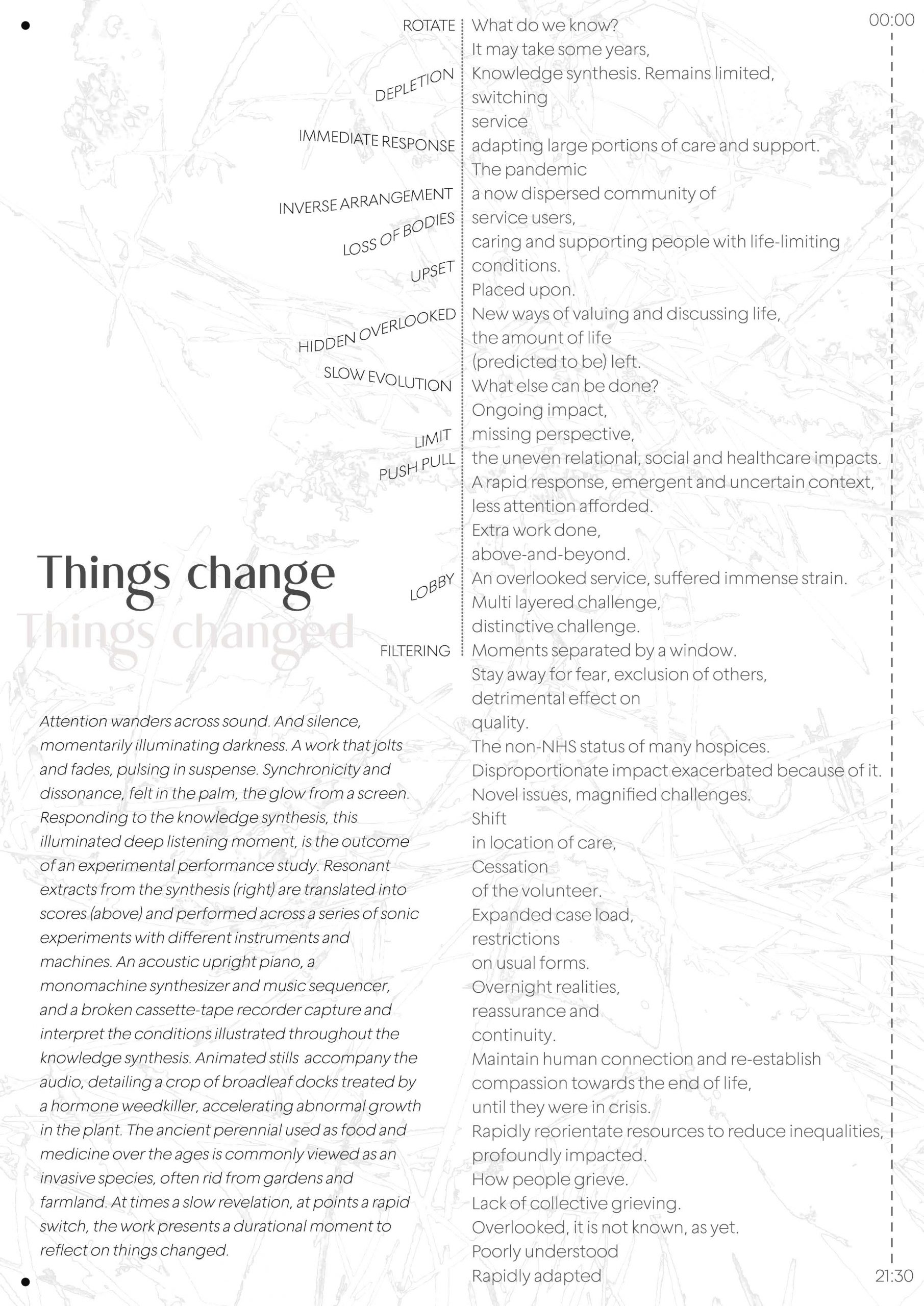 It was important that the listening experience was not compromised by the film, and so wanting to leave adequate space for the sound I animated a series of stills that breathe and fade alongside the audio. The film shows a crop of plants affected by weedkiller, and by using different effects I was able to highlight or saturate the images in and out of focus.

As many social interactions and cultural experiences moved online, as well as most of the hospice provision during the pandemic, I considered how the viewer might experience this work on a phone or computer, physically holding sound, illuminated by the light from a screen. The result is a dynamic interplay between sound and image, lightness and dark, a work that tries to hold the tricky bits in between. 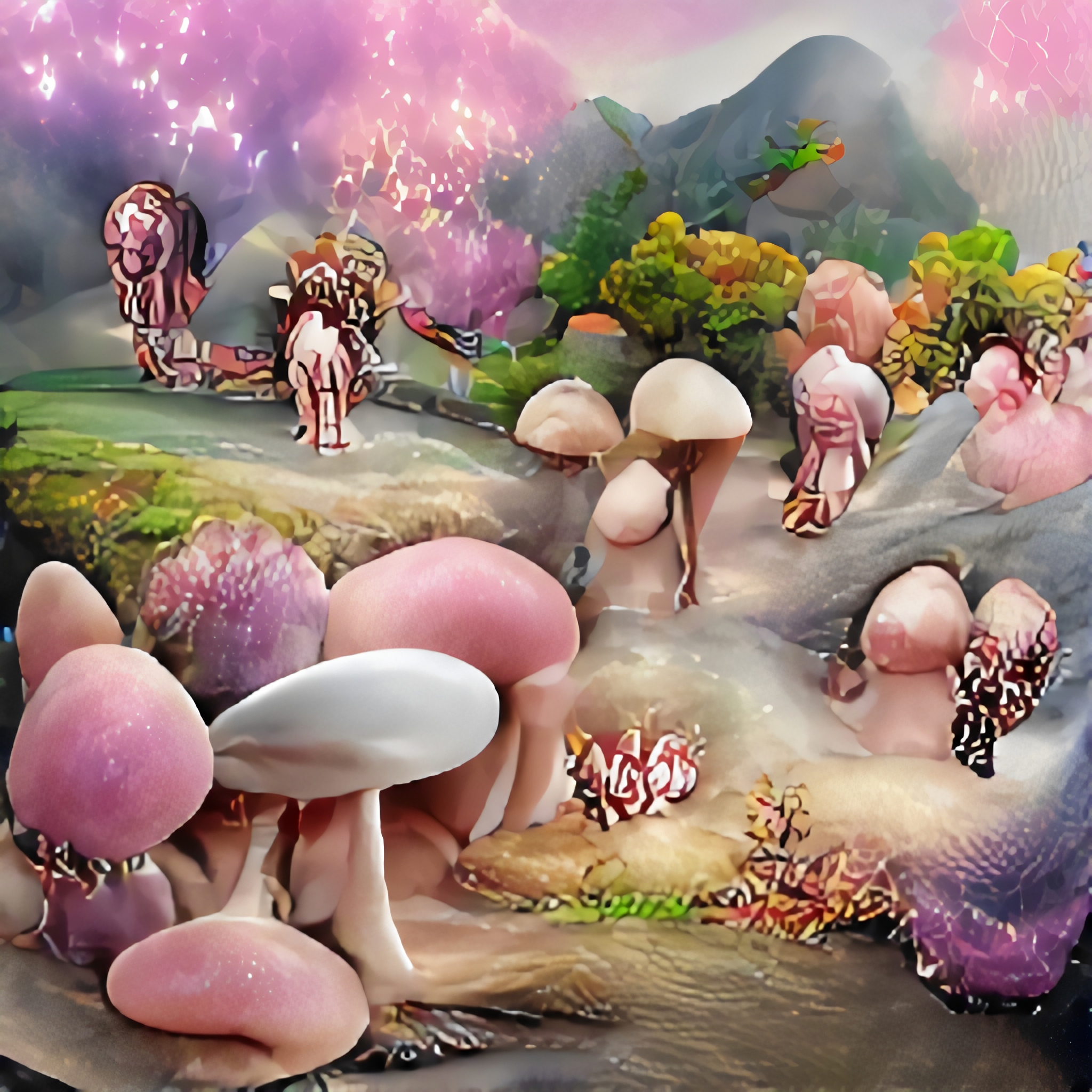