Centre for Cultural and Media Policy Studies, University of Warwick

How does the city influence Coventry’s creatives?

A collaborative artistic research project, Cov Made Me explores the relationship between Coventry as a place, and the identity of artists and creatives in the city.

The team connected regularly during the (very short) project window, developing ways to understand the impact of the city on the identities of Coventry creatives. A description of the research cannot be separated from the process of collaboration – these two strands of work were woven together during the project.

The research began with an online survey asking artists and creatives, both amateur and professional, about ways in which Coventry and specific locations in the city had influenced their creative identities. The survey questions were developed by the researchers and piloted with Mary to tailor this to the intended creative audience. Whilst we had initially proposed that Mary’s input would respond directly to the survey data, we found that our collaboration grew in different, and more creative, directions.

Mary’s artwork explored parts of the survey directly with several Coventry artists, and the researchers have been able to use this as an alternative and additional data set. As well as developing an artist-researcher angle, we found that, as researchers, this collaboration encouraged our creative sides too, and we became researcher-creatives with some input to the artwork being created – although full credit for this goes to Mary and her collaborators.

After analysing the survey response data, we used the film work as an additional data set to further explore place and identity issues. The emerging themes from this analysis suggest that Coventry has had a marked impact on the identity and creativity of respondents. Many physical locations and iconic buildings in the city appear to have found their way into the work of creatives. Some also noted that Coventry has given them qualities like strength and resilience, pride in the City, and a sense of community and belonging which has influenced their personal lives as well as their creative work.

Mary Courtney is an award winning poet and artist from Coventry. She collaborates with film-makers, animators, academics, schools, and members of the public – to create art together. From ‘Art of the Micronosphere’ on giant digital screens, to a ‘Wordrobe’ Wardrobe in a library. Mary co-founded the grassroots community Facebook Group ‘Sitting Rooms of Culture’. Left to her own devices she will be found in a cave, drawing a poem.

Dana Chis is a multi-media producer working in Coventry. She makes short films and animations, and has had work nominated in festivals around the world.

Watch the Cov Made Me film:

Godiva might be the most internationally famous icon of the city, but we have other emblems. The phoenix, three spires, the elephant, and of course – the ring road. I chose the ring road to bring together a film about Coventry creatives and their connection with place. Because the ring road is a place. It is Cov… and people aren’t indifferent to to it, they love it or hate it… it’s the Marmite of the city!

Seen from above as a map, an almost circle with spikes coming out of it, suggests to me a picture frame, or a crown. It was around these creative resemblances that the idea for the film started to form – around the form of the ring road.

Nine creatives featured, to correspond with the nine junctions. Each artist pictured within the ring road frame, creatively reimagined with paint splashes for the junctions. The film, just shy of four mins, corresponds with the (nearly) four mile length of the road. And a nine line poem introduces the artists.

The ideas were developed with researchers Vishalakshi Roy and Victoria Barker. Rachel New from BBC CWR became the voice collector, for the fabulous variety of voices – a real mix of backgrounds and ages. Some professional. Most not. Voices of visual artists and poets hidden in plain sight, revealing the places meaningful to them in the city. Dana Chis gave the most important flourish of all – with her film editing creative wand, pulling the film together. We called it ‘Cov Made Me’. 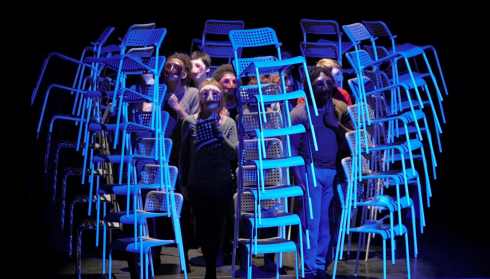 How can a creative production help us to understand the early stages of psychosis?