Art and the Urban Commons

SPACeX and the Phoenix City: imagining the city as a space for social change

We have used the collaborative framework of the Coventry Creates commissions to exchange ideas around our shared interest in the city. We are both engaged with exploring how best to imagine a transformative, equitable and democratic place to live and work. This exchange has resulted in two new artistic outcomes: the first edition of a reiterative poster work entitled How to practise culture-led re-commoning, produced by Partisan Social Club (adjusted by Gary Hall); and a moving-image work Phoenix City 2021 (Reprise), produced by Duncan Whitley in collaboration with composer Abul Mogard.

We see this collaborative exchange facilitated through Coventry Creates as part of an ongoing dialogue around issues arising from our research and practice. Phoenix City 2021 (Reprise) will screen in February 2022, as part of the inaugural SPACeX meeting in Eindhoven, in which the latest iteration of How to practice culture-led re-commoning will also be presented.

The Spatial Practices in Art and ArChitecture for Empathetic EXchange project (SPACeX) enables researchers, scholars, artists, architects and curators to test, map, analyse and communicate the ways in which spatial practices affect public exchange and opinion formation in urban spaces. The project aims to understand how spatial practices support empathetic and inclusive ways of living together. 27 partners across Europe will contribute to the creation of a network that questions the function of culture for democracy. SPACeX explores new ways in which culture can contribute to the city beyond contributing to property development through gentrification processes. By foregrounding the value of social and common wealth SPACeX imagines what culture led urban change might look like if the practice of commoning were a practised as central method towards the transformation of the city.

Mel Jordan (born UK, 1966) is Professor of Art and the Public Sphere in the Centre for Postdigital Cultures (CPC) at Coventry University. Jordan was Head of Contemporary Art at the Royal College of Art before joining the CPC. Jordan’s research is concerned with the potential of art as a political tool through its role as a form of opinion formation in the public domain. She is founding editor of Art and the Public Sphere Journal (2009). She is an artist as part of the Partisan Social Club and formerly an artist in the Freee Art Collective. She has exhibited widely, including: the Istanbul Biennial, the Liverpool Biennial, BAK, Utrecht, Wysing Arts, Cambridge, SMART Project Space, Amsterdam, the ICA London, Centro Cultural, Montehermoso, Vitoria, Spain.

Duncan’s research and practice since 2018 has been predominantly focused on his project Phoenix City 2021. The first public outcome of this project manifested in the Phoenix City Convergence: a symposium and screening programme of international artists’ moving-image work hosted by Coventry Biennial 2019 & Coventry University in October 2019. The symposium was designed as a forum to solicit critical discussion around the ideologies and realities of UK City of Culture, and its significance specifically for Coventry. It featured presentations by Dr. Cara Courage, Dr. Joy White, Emily Hopkins, Dr. Sarah Walford and Adrian Dowling, and a panel discussion chaired by Mike Stubbs.

The full programme of artists’ moving-image works featured in the Phoenix City Convergence was:

Duncan Whitley (born UK, 1974) is an artist working predominantly with sound and the moving-image. He graduated with 1st Class Hons in Fine Art Intermedia at Kingston University in 1999, specialising in site-specific sound.

His practice synthesises the languages of cinema, documentary and spatial sound art. He works through a combination of self-directed projects, commissions and residencies, and has presented site-specific projects, audiovisual works and live multi-channel sound works in the UK, Europe and South America. He was most recently Coventry Biennial artist residency embedded at Coventry University (2018-2020), supported through an Arts Council England Developing Your Creative Practice grant.

Phoenix City 2021 is a moving-image work, combining speculative fiction and observational documentary to examine Coventry during its time as UK City of Culture 2021. The work takes as its starting point Coventry’s relationship to the image of the phoenix. This stems from Donald Gibson and Basil Spence’s use of the mythical bird as a symbol to represent their respective town-planning and cathedral proposals for Coventry realised in the 1950s and 1960s. The contemporary appropriation of this metaphor for a city reborn from the ashes continues today as the city seeks to reposition itself as a cultural destination.


The Partisan Social Club has produced a poster, entitled, How to practice culture-led re-commoning, which sets out a five point plan for commoning in the city as a part of addressing some of the fundamental inequalities present in urban space. We use the term ‘re-commoning’, in order to go beyond historical articulations of the commons as a place of shared land use, and we think (as do others) the use of commons is a contingent and iterative process of living together. We recognise the potential communication routes that cultural processes provide and we propose that commoning becomes foregrounded in arts institutions and cultural production as ways of operating for social and common wealth.  Culture allegiances are sometimes inadvertently connected with property development and economic value, ‘cultural-led recommoning’ instigates a realignment of this away from neo-liberal cycles of reform towards social and material change.

The idea of the poster, just like we advocate for the processes of the commons, changes, and is adapted to the circumstances each time it is used or published. To this end we will invite individuals or groups to adapt the text every time we reissue it. We are delighted that Gary Hall has adjusted the text for its initial publication for Coventry Creates. 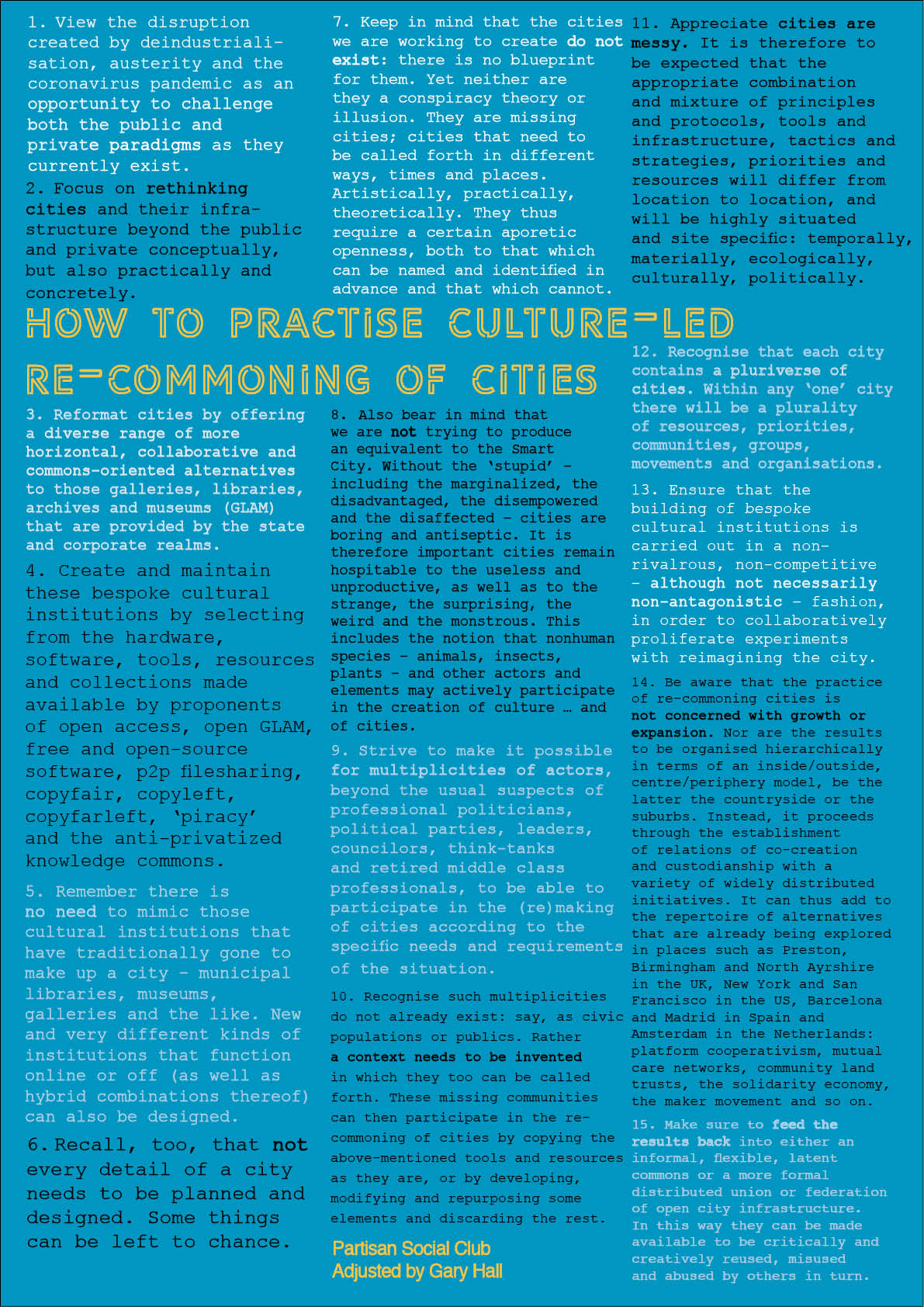 How to practise culture-led re-commoning of cities 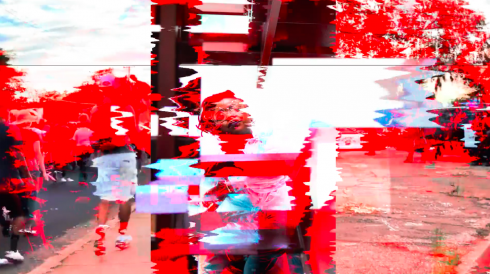 The City
is a
Virus

What would the city feel like if it were human?